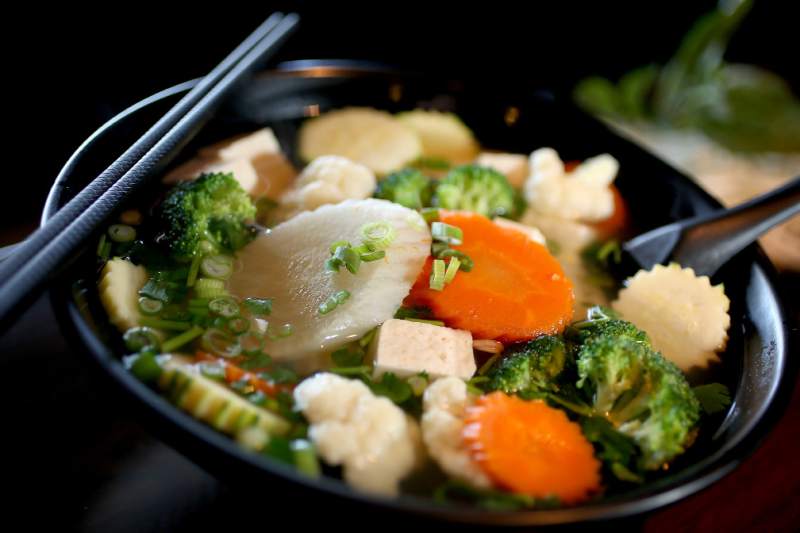 THOUSANDS OF YEARS IN THE MAKING

For centuries, Vietnamese cooks have been adapting the techniques, ingredients, and recipes of conquering overlords, trading partners, and neighboring nations, to create a cuisine that is arguably the best in the world, and certainly one of the healthiest. The flavors of Vietnam are fresh and light, featuring herbs such as basil, Vietnamese mint, lemongrass, and coriander/cilantro. The versatile fish sauce known as nuoc mam makes an appearance at most meals, as does seafood, and rice noodles, fresh vegetables, rice, and lime juice.

Vietnam's three main areas, the North, Central, and South, each have their own regional variations, reflecting their different climates, cultures, and traditions. In the north, which has a distinct winter, ginger and dill are commonly used, as are some Chinese spices. The food of the Central region is the spiciest in Vietnam and includes everyday home cooking, as well as the elaborate Imperial cuisine developed during the Nguyen Dynasty. In the lush, tropical south, there's a stronger focus on salads and herbs, which are added to soups or used as wraps.

Vietnamese dishes balance textures and flavors by blending spicy, sour, bitter, salty, and sweet. Each dish should appeal to all five senses, too, and great attention is paid to the colors, spices, textures, and presentation of even the most humble dishes. The Vietnamese also follow the Chinese belief that each meal should contain a ying-yang balance of "hot" and "cooling" foods.

Vietnam has a plethora of noodle dishes, from stir-fries to soups containing noodles made from rice, tapioca, and wheat, and sometimes a combination.

Bun bo Hue. Perhaps the most famous central Vietnamese noodle dish is the spicy beef soup, bun bo Hue, from the former Imperial capital of Hue. The broth is made by slow-cooking beef bones, lemongrass, and high-quality shrimp paste. A spicy red oil is made by frying chili and annatto seeds; this is added at the end to create a thin mouth-kicking layer on the broth. Bun rieu and hoan thanh mi. In the north, the noodle specialty is bun rieu, featuring thin rice noodles and a tomato-y broth made with pounded rice paddy crab. The Chinese influence in this region is also apparent, for example, in the popular noodle dish hoan thanh mi. Said aloud, it’s clear that hoan thanh is the local adaption of wonton, while mi is Vietnamese for wheat noodle.

Mi Quang and cao lau. Central Vietnam's Quang Nam province, which contains the cities of Hoi An and Danang, is home to some of Vietnam's most delicious noodle soups, in the form of mi Quang, a savory half-soup, half-salad noodle dish with pork, prawn, quail eggs, and rice cracker shards. Equally popular is cao lau, which uses local noodles with an almost mythical backstory, along with pork and fresh herbs. According to the local belief, cao lau noodles are only authentic if they are made from water from a certain Hoi An well and the ash of a particular type of tree found on nearby Cham Island.

Pho. Perhaps the most famous Vietnamese food, and the unofficial national dish, pho(pronounced “fuh”), is a tangle of silky rice noodles and beef (which can be raw and sliced thin) or chicken in a fragrant broth with hints of roasted onion, ginger, star anise, cinnamon, and cloves, garnished with coriander, onion, green onion, and bean sprouts; this is a must-try dish. True foodies will enjoy the subtle changes in the way pho is prepared and served as they travel through Vietnam. In the South, an array of accoutrements, including a basket of fresh herbs, is served alongside a bowl of pho but in the north, Hanoians believe the broth should be so good, nothing needs to be added, so minimal accompaniments are provided. Once you get down into the Mekong Delta, the pork and prawn noodle soup known as hu tieu is more common than pho.

Rice wine There are many forms of rice wine, including the Central Vietnamese ruoi can, a sticky rice wine prepared in six-liter vats and consumed communally through giant straws, and snake wine, where whole snakes are infused in rice wine or grain alcohol, seen most often in tourist shops.

Banh mi. One of the most obvious culinary legacies of the almost 100 years of French rule,banh mi is the Vietnamese version of a baguette. There are a few different varieties of banh mi, with the most popular being banh mi thit, a crisp-on-the-outside and fluffy-on-the-inside baguette with pâté, slices of Vietnamese sausage, strips of cucumber, pickled carrot and radish, fresh herbs, and slices of chili. Banh mi op la is a great on-the-go breakfast, filled with a fried egg, soy sauce, and strips of cucumber. There's also a roast pork and barbecue sauce version, banh mi heo quay. The best banh mi vendors will lightly toast the baguette before slicing it open, filling it with fresh ingredients, wrapping it in a square of paper secured with an elastic band, and presenting the warm parcel to the customer.

Cuon Diep. Vietnamese cuisine also features a range of other wrapped and rolled delights, some of which are prerolled, such as cuon diep (mustard leaf wraps), while others are a wrap-your-own affair, customable with a vast array of herbs, meats, and salad items.